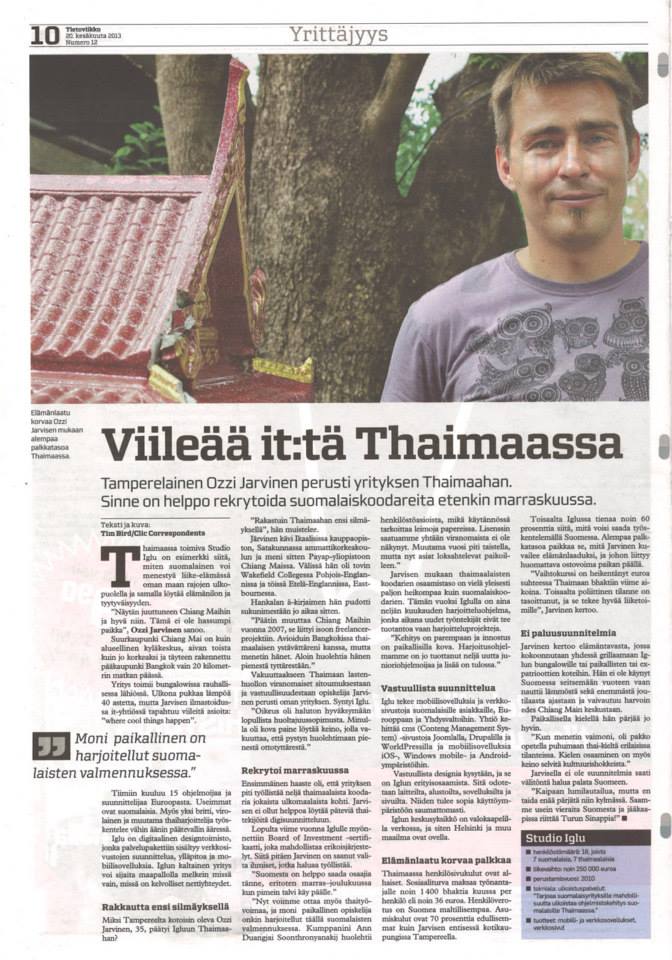 Ozzi Jarvinen from Tampere started a company in Thailand,
where recruiting Finnish developers is easy, especially in November.
Written by Tim Bird

Studio Iglu in Thailand is a prime example of how a Finn can do business successfully outside the borders of Finland, whilst finding happiness in life simultaneously.

“I seem to be stuck in Chiang Mai, but that’s fine, as it’s not bad at all as a place to stay”, says Ozzi Jarvinen.

The metropolis of Chiang Mai is more like a local village centre compared to the busy capital Bangkok, 700 kilometers away, that is filled with high rise buildings.

The company is located in a bungalow in a calm suburb. It’s 40 degrees hot outside, but cool inside the air conditioned office “where cool things happen”.

“Many locals have been apprentices under Finnish coaching”

The team consists of 15 developers and designers from Europe: most are Finnish, but there is also one Brit, Estonian and a couple of Thai apprentices working quietly at their desks.

Iglu is a digital design office, that includes web design, web administration and mobile apps in their packages. A company like Iglu can be located practically anywhere in the world with decent internet connections.

Why did Ozzi Jarvinen, from Tampere, end up to Iglu in Thailand?

“I fell in love with Thailand at first sight”, he remembers.

Ozzi studied at the Commercial school of Ikaalinen, college in Satakunta and then went to the Payap University in Chiang Mai. In between he spent a while at the Wakefield College in Northern England and worked in Southern England in Eastbourne.

The difficult “ä” letter he dropped from his surname a long time ago.

“I decided to move to Chiang Mai in 2007, because of a large scale freelancing project. I got married to a Thai friend of mine in Bangkok, but lost her, and started taking care of her daughter.”

To convince the Thai child care authorities about my commitment, Ozzi started his own business and Iglu was born.

“The court was unwilling to accept a final guardian agreement. I was pressured to find a way to convince them that I could take care of a little adopted daughter.”

Finally last year, Iglu was given the Board of Investment -certificate, that allows special arrangements. Since then, Iglu has been able to choose the people it recruits.

“It’s easy to get skilled Finnish people, especially in November to December, when the dark winter hits Finland.

“Now we can also take Thai employees and many local students have been interning here under the guidance of Finnish people. My partner Ann Duangjai Soonthronynakij takes care of human resources, which practically means stamps on papers. After we got the licence, we haven’t seen a single official here since. We had to fight for it for a couple of years, but finally things are settling down.

According to Ozzi, the skill level of Thai developers is still significantly lower than that of Finnish ones. Therefore, Iglu always has a four-month-long apprentice program, where new employees are not producing but working on practice projects instead.

“The development is better and the locals are very enthusiastic. The apprentice program has already produced four junior developers and more are on their way.”

Responsive design is in demand, and that is the speciality of Iglu. It’s expected from devices, platforms, applications and websites. They have to suit their user environments seamlessly.

The headquarters of Iglu is online with fiber optic broadband, so Helsinki and the rest of the world is right at the door.

Personnel costs are very low in Thailand: social security costs about 1400 baht a month per person, which equals about 36 euros. Employment tax is more moderate in Thailand, and the living costs are 70% lower than in Tampere, which used to be the home town of Ozzi Jarvinen.

On the other hand, at Iglu you only earn about 60% of what you could earn by working in Finland. Lower wages are compensated by what Ozzi describes as quality of life, which includes a significantly higher local purchasing power.

“The exchange rates have weakened the Euro in relation to Baht recently. On the contrary, the political situation has stabilized, which is good for our business”, Ozzi explains.

No plans for return

Ozzi talks about a lifestyle, where people get together for a barbeque at the Iglu bungalow, or to the home of locals or expats. He has not visited Finland in 7 years and enjoys the warm climate, increased free time and rarely even visits the Chiang Mai city centre.

He is already doing well with the local language.

“When I lost my wife, I had to learn to speak Thai in various situations. Knowing the language is also a way to survive the culture shock.”

Ozzi has no plans or wants to return to Finland anytime soon.

“I miss snowboarding, but doubt I can survive in the cold anymore. We often get visitors from Finland so my stocks of Turun Sinappi (Finnish mustard) won’t run out anytime soon.