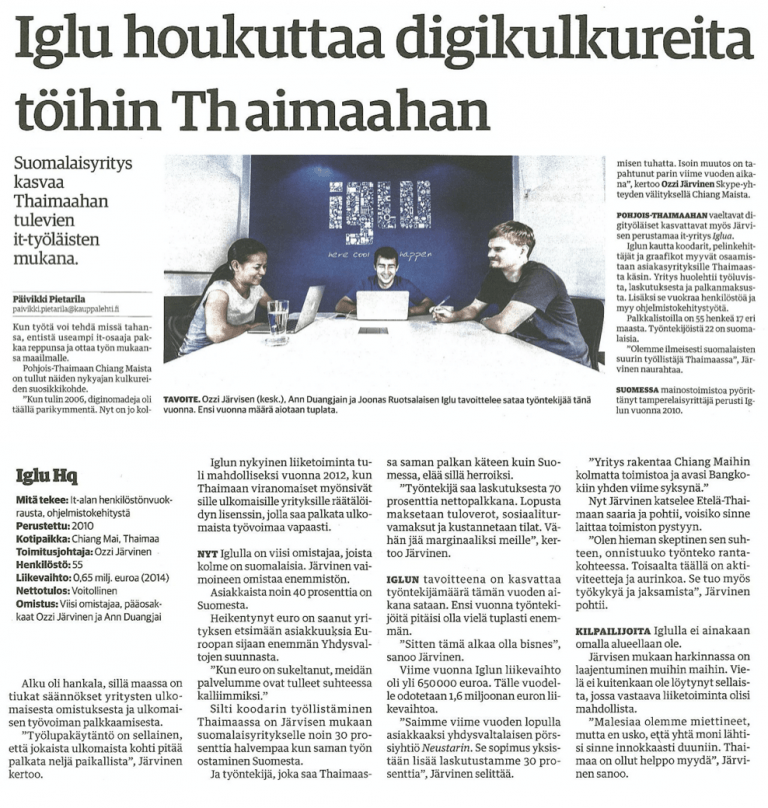 Our CEO Ozzi Jarvinen was recently interviewed by Finland’s leading financial newspaper, Kauppalehti. It’s all in Finnish, but we did a rough translation below for the other 99.999% of people in the world.

The Finnish company is growing in Thailand with future IT workers involved.

When the work can be done anywhere, more and more IT-experts are packing their bags and taking jobs elsewhere in the world. Northern Thailand, Chiang Mai has become one of the modern-day travellers favorite destinations. “When I came in 2006 there was a couple of dozen digital nomads here. Now it is already about three thousand. The biggest change has occurred over the last couple of years,” says Jarvinen Ozzi via a Skype link from Chiang Mai.

Digital nomads who wander to Northern Thailand are growing the IT company, Iglu, set up by Jarvinen. Through Iglu, programmers, game developers and graphic designers sell their expertise to clients around the world, working from Thailand. The company is responsible for work permits, invoicing and payment of wages. In addition, it leases the staff and sells software development. The payroll of 55 people come from 17 different countries with 22 employees being Finnish. “We are obviously the biggest employer of Finns in Thailand,” Jarvinen says with a laugh.

Entrepreneur Jarvinen (from Tampere) had an advertising agency in Finland before he founded Iglu in 2010. The beginning was difficult as the country has strict regulations on foreign ownership of companies and foreign labour recruitment. “The work permit policy is such that every foreign employee means having to hire four locals” Jarvinen says. Iglu’s current business became possible in 2012 when the Thai authorities granted it a license customized to foreign companies, which allows employing foreign labour more freely.

Now Iglu has five shareholders, three of whom are Finns. Jarvinen and his fiancee own a majority. About 40 percent of the customers are from Finland. The weaker euro has pushed the company to look for more customers in the direction of the United States. “When the euro has depreciated, our services have become relatively more expensive.” Yet coder employment in Thailand is still about 30% cheaper according to Jarvinen, compared to using a Finnish company, based in Finland doing the same job.

Employees of Iglu who work in Thailand often get a similar salary in hand as in Finland, so effectively they can live like a king. “An employee receives 70 percent as net salary . From the 30% comes taxes, social security contributions and financed facilities. A little margin is left for us too” says Jarvinen.

Iglu’s goal is to increase the number of employees this year to one hundred. Next year, employees should be around twice as many. Then this is beginning to be a business,” says Jarvinen. Last year at Iglu, net sales amounted to more than €650,000 with the expected turnover of €1.6 million for this year. “Late last year we got a customer in the US called Neustar. That agreement alone is adding 30 percent for our business” Jarvinen explains. “The company is building a third office in Chiang Mai additional to the one in Bangkok opened last fall.”

Now Jarvinen is looking south to the Thai islands and is considering whether to put the office down there. “I am a little skeptical on the successful working on the beach. On the other hand there are plenty of activities and sunshine. It also brings up the ability to work and well being” Jarvinen says.

Iglu doesn’t have any competitors, at least not in its own field. According to Jarvinen, they are considering to go to other countries too. However, they have not yet found the right places in which a similar business would be possible. “We have been thinking about Malaysia, but I do not think that as many would go there with the same enthusiasm. Thailand has been a very easy sell,” says Jarvinen.