Get Ready For Thailand’s Green Season

You may have heard that Thailand has 3 seasons: hot, hotter, and hottest. More commonly, they’re broken down into: cool season, hot season, and rainy season. Both are right, depending on your point of view. But there’s another way we can describe the 3 seasons: cooler & dry, hot & dry, and warm & green.

The green season from June to October is actually my favorite of the three. It’s a shame the term “rainy season” scares away many visitors from seeing Thailand during the most lush and vibrant time of year.

How Different are Thailand’s Seasons, Really?

As a tropical country, Thailand doesn’t have a huge swing in temperature throughout the year. It’s not like living in Chicago or New York, where the difference between summer and winter is drastic. Even during the “cool” season you can usually feel comfortable wearing a T-shirt during the day.

For the majority of the country, the 3 seasons are:

On Thailand’s southern peninsula, however, there are really only two seasons: wet and dry. The timing of the wet season depends on which side of the peninsula you’re on. The west coast has an April-October rainy season, while the east coast gets more rain from September-December. When you think of a “rainy season” you’re bound to imagine day after day of non-stop torrential downpours bringing nothing but wetness and misery, but this isn’t really how Thailand’s green season plays out. Contrary to popular belief, it doesn’t rain every day during the rainy season. Moreover, when it does rain, usually it’s for a brief period of 1-2 hours in the afternoon or evening.

Often the skies are simply overcast and filled with warm, comfortable air that’s neither too hot nor too cool. But the majority of the time, the green season features bright blue sunny skies peppered with big, white, fluffy clouds.

Seasonal rain brings the countryside to life. Trees everywhere are covered in thick green leaves, creating many shady spots to hide from the sun. Rice fields outside the villages take on the appearance of lush green carpets.

Drive up into the mountains and marvel at the vistas that open up before your eyes. As the periodic rain washes any dust from the air, mile upon mile of rolling green hills become crystal clear. What Causes the Monsoon?

Many people incorrectly use the term “monsoon” to refer to the rainy season or heavy rain itself, but a monsoon is actually when the prevailing wind seasonally reverses direction. In South and Southeast Asia there is a southwest monsoon during the Northern Hemisphere’s summer which brings humid air from the Indian Ocean, causing extensive rainfall. During the winter, however, the wind switches direction as the northeast monsoon brings cool, dry air down from China and Central Asia.

Fun fact: Asia’s monsoons are caused by the Tibetan Plateau. During summer months, the vast high-elevation landmass of the Tibetan Plateau heats up under the sun, causing the air above it to also heat up and expand. This causes a huge low-pressure system to develop. The higher pressure air mass located above the Indian Ocean rushes in over the land and subsequently dumps massive amounts of rain. Ironically, the air’s moisture is mostly exhausted over the foothills of the Himalaya, so that very little rain reaches Tibet itself.

When it Rains, it Pours A tropical downpour is a thing of beauty. The good news for those staying in Thailand during the green season is that you can almost always see the rain coming. Typically, heat and humidity will build under afternoon sunshine until some seriously sinister clouds start to appear. The sky will turn dark gray, maybe with thunder, a slight drizzle sprinkles the ground, and then… BOOM! An intense, heavy shower of rain crashes down to the earth. As it rages hard for the first 5 or 10 minutes you start to think you might not be able to go outside for the rest of the day. More often than not, though, half an hour later the rain is back down to a light drizzle, and the sun is back an hour later. The early evening air is left fresh and cooler, with no need to change your dinner plans.

In Chiang Mai, the rain often rolls in from the mountains on the west side of the city. From your apartment balcony you can see it coming long before it hits your area. Depending on where you live, the rain might not even make it that far. Quite often one side of town gets dumped on, while other neighborhoods stay completely dry. If you see motorbike drivers coming from the opposite direction wearing rain ponchos, you know what you’re headed into.

Tips For Dealing with The Rainy Season in Thailand Seasonal rain is easy to deal with if you prepare and adjust for it. Basic preparation means having a rain poncho and/or umbrella. If you walk around a lot, you should carry a small umbrella with you at all times during the rainy season. If you drive a motorcycle or scooter, you can keep a plastic rain poncho under the seat. As long as you’re not going too fast, driving in moderate rain wearing a poncho is surprisingly comfortable. You can buy cheap rain ponchos at nearly every convenience store. Otherwise, specialty shops in large market areas carry higher quality ponchos that last longer and provide better protection.

The second main point when dealing with monsoonal rains is to be flexible. Sometimes standing under a shop awning for 5 or 10 minutes to wait out the heaviest part of a rain storm makes all the difference. Be prepared to adjust your plans if it means you can avoid getting totally soaked. The rain affects everyone equally, so nobody is going to stress out on you if you’re a few minutes late to an appointment because of the weather in Thailand. Thais tend to have a rather loose sense of punctuality to begin with. “Thai time” becomes even more flexible when it’s rainy season.

Be on the Lookout for Rainbows Every once in a while, the green season delivers a surprise.

Thinking about a tropical change? Check out this post on how you can relocate to Thailand with Iglu’s help. 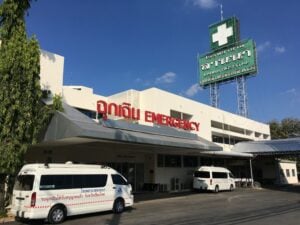 Getting Sick in Thailand – What to Do? Is It Really That Safe In Thailand?

The Thailand Smart Visa Explained – Is it a “Digital Nomad Visa”? 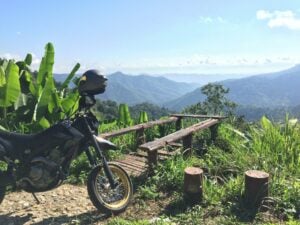